Nathan Ligo 5th dan of KyokushinKan, who participated in the Kyokushin Karate Seminar that I held in Washington D.C. recently.

After I completed my Uchi Deshi program (of three years) I returned to my hometown Shizuoka for 5 years, but then Sosai asked me to come back to Honbu as Head-Instructor as well as Uchi Deshi Dormitory Chief and Manager, so I returned to Tokyo, and Honbu. A short time after my return, Nathan Ligo enrolled in the Uchi Deshi program. He had been practicing Taekwondo previously, but as an Uchi Deshi he started from scratch as a white belt.

After I had been on the job for a few months, Mockaramo Ahmed and Judd Rei and Nathan Ligo (in the picture from right to left) ‘enrolled in the program, and about one year after that Nicholas Pettas also entered the program and the dormitory. (By the way, at the left end in the picture is Ulrika, my wife, who worked as Secretary to Sosai Oyama Masutatsu at that time)

My major role in this position, was to become a “high, big and solid wall” for the Uchi Deshis (for them to overcome one day), both for the Japanese and foreign Uchi Deshis.
My role was NOT to be a kind, nice, “easy to understand” , great teacher.

Although being in the same Uchi Deshi program, the situation is not the same for all of them. Especially there was a big difference between the Japanese Uchi Deshis and the Non-Japanese Uchi Deshis. For example, as for the Japanese Uchi Deshis, at the same time as they did their hard physical karate training, they had to carry out a lot of different chores, such as helping with the office work, cleaning, cooking food, taking turns with the night watch (of Honbu), attendant to Sosai, and a lot of other different work that needed to be done to run the Honbu Dojo.
As for the Non-Japanese Uchi Deshis, because of the language barrier, they were not assigned to do tasks such as running errands, taking the night watch, cooking, attendant to Sosai or other chores. Basically, they were provided with an environment where they could focus only on their training.

In the Karate Practice, of course the most important thing is the karate training “Keiko”. However, in the Uchi Deshi Practice, not only the physical karate training “Keiko” but everything else that comes with this “living-in program” is actually even more important in terms of pursuing the Path. That part is actually the most significant difference between the “general dojo students” and the “Uchi Deshi, living-in-students”.

Because of this, from the Japanese Uchi Deshis’ perspective, the Non-Japanese Uchi-Deshis, although they are being seen as fellow Uchi-Deshis training side by side, they are still looked upon as “guests” from overseas.
Regardless of whether this is a good or a bad thing, this is a completely natural state of things, because the situation cannot be exactly the same. (Which of course does not have anything to do with race, nationality, or being superior or inferior, above or under, because of the differences, but merely a difference that is a fact because of our differences in language, culture, environment etc.).

It is important for both parties to respect each other, for example, the Japanese Uchi Deshis should respect their foreign fellow Uchi Deshi for coming all the way to Japan, for enduring this hard training program despite the language barrier, cultural differences and a completely new environment. At the same time, the foreign (non-Japanese) Uchi Deshis should keep a humble attitude towards their fellow Japanese Uchi Deshis acknowledging the fact that they carry out a lot of different tasks, helping out in the kitchen, taking the night watch, running errands, attendant of Sosai and other chores, all this at the same time as they have to continue the hard physical karate training, If you, as a Non-Japanese Uchi Deshi, reach the insight that “compared to the Japanese Uchi Deshis, we have more freedom, and their path is harder than ours, so to add up to that, we must be more severe in our pursuing the Way of our physical Karate training ”. This kind of insight would be a proof of great growth, and expansion.

So again, at the same time as you take pride in having completed the Uchi Deshi program, if you also acknowledge and are humble to the fact that ” the Japanese Uchi Deshis had to go through this program carrying out a lot of different tasks (not only the training) that we didn’t have to do, so we have to train even harder, and do better ”, that will lead to your personal growth and expansion.

For me during those years, I wanted the Non-Japanese Uchi Deshis to understand this difference, I wanted them be modest and humble to that fact that there were differences between the Japanese and Non-Japanese Uchi Deshis, And also to acknowledge that, since they were not giving the opportunity to gain insights from the “non-physical” path, (the practice through work and chores already mentioned) that the Japanese students carried out, they should instead put more efforts into their physical training, the path of the physical Karate Practice.

Therefore, in my position as Honbu Head Instructor and as Dormitory chief & manager, I felt it was necessary for me to become this large, high and solid “wall” for my Kohais (juniors). And in order to fulfill the task that I had been assign to, (despite of the differences that I already mentioned) I did always treat the Japanese Uchi Deshis and the Non-Japanese Uchi Deshis the same, which means that I was very hard and tough on all of them.

Although my tough and strict style of teaching would be accepted by the Japanese, I understand it must have been an extremely difficult and hard situation for the Non-Japanese. And, for most of the time, my true intentions were not fully understood by them (as the high-context culture that Japan is), and I guess that most of the time they resented me.

However now, I met Nathan Ligo for the first time in over 20 years, at the Karate Seminar in Washington and I’m sure that the Uchi Deshi life was a tough experience for him.

Regardless whether you are Japanese or Non-Japanese, living a life where your daily attitude and performance are rigorously controlled, with strict rules that must be followed, and if you don’t follow the rules you get scolded and reprimanded is hard. Whenever necessary, I made them do an enormous number of sets of Jumping squats, which of course is a good practice to build strong legs….. (I did not physically punish them, but I gave them a hard time in the fighting training….)

My role was to become this high, big and solid “wall”, which my Kohai (juniors) in time, should be able to conquer, to overcome as they expand…. Again, my role was NOT to become an easy-going, likeable guy.

For me it didn’t matter how much they would resent me, as long as they grew up to be big and strong, both physically and mentally. That would mean that I had fulfilled my role and that I had met the expectations that Sosai had on me.

For better or worse, I believe that for Mockaramo, Jude, Ligo, Nicholas and other non-japanese Uchi Deshis who crossed my path during those years, I was this really nasty, not likeable Senpai (senior) that they never will forget.

So, I was really happy that Nathan Ligo attended the Seminar in Washington. He instantly came up to me and said, in Japanese: “Yui Shihan, thank you so much for the time back then, I apologize for the inconvenience that I caused”.

That means that my intentions had been conveyed and had led to a great growth and expansion for him as person.

For me, having steeled my heart against them, this felt like an award, and it made me very happy.

This reunion was one big event amongst others that made me feel that it was a good decision for me to visit Washington this time. 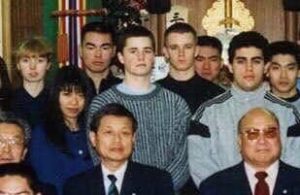 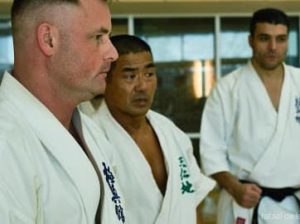 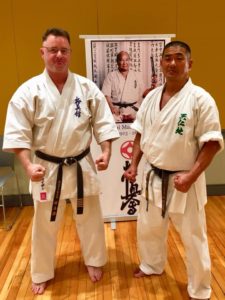