A Message from Sosai
Something forgot to share with everyone at the Seminar in Washington.

The founder of Kyokushin Karate, our great teacher Sosai Masutatsu Oyama, always said that, “I teach you the basics, but YOU, yourself need to grasp the essence of it in order to comprehend the ultimate meaning”
(Personally, I believe that this saying itself, is in a way a description of the “ultimate meaning”)
So actually, Sosai did not teach anything concrete or specific. Instead, his advice was in the form of some clues or hints throughout our training, and then he left us to ourselves.

Although Sosai didn’t say much, when I visit seminars overseas, I try to convey at least a few of the advices that he gave me. One episode is after my black belt grading. The advice that Sosai gave me at that time has become a true treasure for me. I forgot to tell the participants at the Washington Seminar about this and would like to share this experience with you all.

The advice that he gave me, was when the two of us were alone, and maybe it is not that special, actually I believe it is quite a simple and common way of thinking. However, hearing those words directly from Sosai, was different. The words from him in person go straight to your heart and soul, the impact of the words is completely different.

Sosai probably sensed my feeling and looked at me and said; “Yui!, If you would think of yourself as a “teacher” (that you can teach) or an “Instructor” the moment you got your black belt, then you’re done, so don’t worry, just keep up your hard work”

Although I’m not originally a person who would think of myself as a “teacher” or that I’m “teaching others” , to be given this advice directly from Sosai, when there were only the two of us in the room made a very strong impact on me, and after that I made sure never to use the word “teaching”, not even by mistake.

Word has a magical power, so in order to avoid being affected by that power, so I stopped using the word “teaching”, “being a teacher” or instructor, and so on. Instead I started to use words such as “being in charge of (overseeing) the class/training”, “passing on knowledge” and so on.
(In Japanese the words “Oshieru” Shidousuru” means “teach”” instruct”. The words “Gorei wo kakeru”” Keiko wo tantosuru” “Ttsutaeru” means” be the one giving the command in class” “be in charge of the training”,” passing on knowledge”.)

By using this kind of wording, automatically you change your mindset, and become focused on improving yourself, on concentrating on your own training first (which of course doesn’t mean that you are neglecting the students), which then creates a positive synergy effect, and the students will also train hard. (When they feel that you are not just “teaching” them, you are training together with them, that will generate a positive force, and everyone will do their best in their training)

Of course, this depends on the individual person. Even if a person’s mindset is “teaching”, it doesn’t mean that he/she will degenerate. There are of course many people who feels that since he/she is “teaching”, is an “instructor”, it is even more important, and his/hers responsibility to continue to train hard and to evolve.

So, the issue is not about the words you use, but merely about your “mindset” and “awareness”. Thus, it is really up to each individual.

However, those words came from our great teacher, Oyama Sosai, who had fought many battles throughout his life, and who was the strongest and the greatest master of all.
I knew that he would never say some simple words that just anyone could easily understand. So, at that time, when I just had received my black belt, my 1st Dan, I understood and felt that there must be a deeper meaning in this.

Therefore, I became careful with my words, and tried to make sure not to imply the meaning of “teaching” in my speech. When I’m training with others, my hope is always that those training with me will see and feel some of the things that I have learned from Sosai, my learnings from keeping up the hard training, and other insights that I have had over the years.

However, with that said, I am still on my Way, and have still a lot to learn, and there are probably still times when I get carried away.

I strongly believe though, that if I am given the chance, I should pass on Sosai’s teaching to the next generation.

Many years ago (when Sosai still was with us) I did the performance in the Kyokushin Karate Video, and there were a lot of comments and thoughts that reached my ears, such as “ why should HE perform in this video?”, so this was a period which was not very pleasant.

But during that time, when I felt low, my great Sempai Oishi Shihan gave me some encouraging words “Yui! Sosai chose you for this video, he didn’t choose Royama-Sempai (shihan ), he didn’t choose Oishi Daigo, and he didn’t choose Matsui Shokei, he chose YOU!, you should think about the reason why he made that choice!”.

For a long time, I thought that Sosai chose me for the video because my techniques are quite clean and precise.

However, later on, Sosai passed away, and Kyokushin split into several fractions, and since then we have seen many changes in the training in the different organizations and dojos (without saying it’s good or bad) ; in the warming up techniques, in the basics, in the ido-geiko, and Kata and so on.

And then one day I realized (or I thought) that “Sosai understood my personality, and he probably felt that no matter what, I would most certainly maintain the basics (kihon) and Kata the same, I wouldn’t make any changes, so maybe that was why he chose me to perform in the video”.
I guess he wanted to use my stubbornness.

My story got off track, but Sosai’s very basic advice to me that day when there were only the two of us in the room: “If you would think of yourself as a “teacher” (that you can teach) or an “Instructor”, then you’re done”, I believe that wanted to pass on those words to me as well, so that I would pass the same message on to the next generation (because he saw through me, my personality and new that I would do that) .
(Of course, Sosai probably gave the same advice to other people, not only to me)

Many Dojo operators participated in the Washington Karate Seminar, and I went there with the purpose to convey this “message” (amongst others ) from Sosai, but I got completely caught up in the training and forgot to tell the participants about this:

““If you would think of yourself as a “teacher” (that you can teach) or an “Instructor”, then you’re done”

Next year I will be visiting Hungary, Washington, and New York, I’ll make sure not to forget to talk about this episode and others, of course, the talk comes after hard training.

“I teach you the basics, but YOU, yourself need to grasp the essence of it in order to comprehend the ultimate meaning”

Rather than take it for granted that someone will teach you what you need, be sure to grasp the essence of the teaching yourself. This was the most important essence of Sosai’s teachings that I learned, and I guess that maybe the time has come for me to convey my insights and understanding, convey the true meaning of the advices that I have been given directly by Sosai, to others, through overseas Karate Seminars. 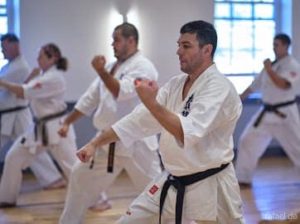 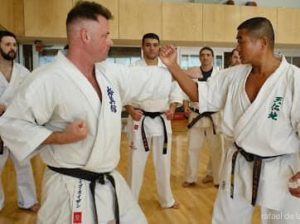 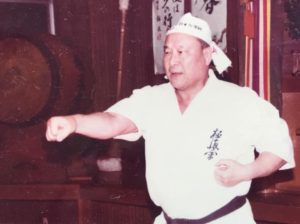